Identity Theft and the Unicorn of Security

We need to believe in magic, myth, and miracles. We need to fantasize and dream to distract us from the drudgery of our day to day lives. To make sense of the meaning of our Groundhog Day existence.

This is where I go insane. People confess these things to me and I lose it. Drudgery?! Groundhog Day? That is unacceptable. You don't need distractions you need a new life. Why do we settle? Why do we endure the pain and suffering? Because we are martyrs? Because "this is the best it can be"?

Never fault anyone who wants a job that will last until they die. They just don't exist. :) I just met two young managers who basically told me they want an annuity as a career. You know, where you can literally produce an excel spreadsheet and a linear graph of the "guarantee" of the compensation, benefits and retirement. The unicorn of security.

This late 20ish man and woman were like characters from a Mad Men era of career certainty. Get on the escalator and it will take you to the top. 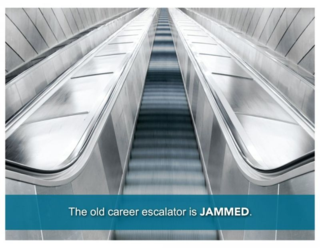 Courtesy of Start-Up You

I know that global instability, the insecurity of families, the nightmarish experience of serial layoffs and unemployment breed this extreme, illogical, and actually quite dangerous perspective.

Tried to guide these two people, with only little effect. The young woman has been laid off several times consecutively. Three promising jobs were attained since she earned her graduate degree in business. Three name brand firms with sterling reputations (2 of which no longer exist). Three bosses who assured her of a career path. Her confidence was shattered. Her risk averse muscles grew on steroids. She now wants certainty. Yikes! I get it. I really do. Being jilted at the alter three times would make anyone anti-marriage. But would it make you anti-love? Anti-dreams? She has accepted a position as a bureaucrat that offers "security of employment" and a "great pension". "If I just keep my head down and do my job, I'm set for life." But is that a life you want?

Our conversation shifted to her life outside of her job. I strongly advised her to build out this part of her life to "balance" her job with her passions and other skills. This woman has so much to offer and it would be a waste and a shame if she does not invest this part of herself. She and the community would be poorer. My secret unspoken idea was to make sure she built her network and confidence outside of her day job as a hedge against the unthinkable but possible 4th layoff!

The greatest glory in living lies not in never falling, but in rising every time we fall.  Mandela

The young man with a young family has also endured a triumvirate of bad choices. Four jobs that were not "good fits". Four consecutive times where there was a serious disconnect between both bosses and missions. Four "layoffs". Now all he wants is "security and stability". It was obvious to me that this gentleman was using somebody's else's compass to find his career. When he looked in the mirror he did not see his own image. He did not know himself. The "fit" would never happen until he knew his own size and his preferences. As I preach here ad nauseum, the first networking connection is thyself! I tried to steer the conversation away from his "bad luck" and "poor timing" to the delicate subject at hand. Lucky for me, he arrived at his own doorstep to begin a process and now contemplates a path that reflects his interests and his life. I know this sounds obvious, but I encounter many people who are under the assumed identities of what they think they "should" do, "should" be--everyone has told them what they are good at and what makes sense. They adopt this identity and the consequences in the long run are devastating. They allow others to steal their identities.

These two people will find their way. It just will not be what they planned.

I am reminded of the power of mentoring: when I give advice it helps the me/the mentor more than the mentees. I am grateful for the chance to help others and to think about my own disjointed path and whether I am being true to myself. I will continue to push myself and others towards their own identities and away from the false gods of stability and security.