Add Some Grit to Your Diet

No I did not say "grits". And this is NOT another rant about Paula Dean. :)

I said grit--"The perseverance and passion for long term goals." Or the "abrasive particles or granules that facilitate grinding."

I think both are needed. A persistent attitude that pushes you to practice and to improve. And friction of reality along the way to keep you focused. 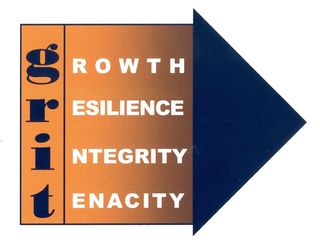 The path to success is a grinding process of honing, of shaping, of refining your skills knowledge and abilities. Without the friction of reality and the dogged persistence.

Deliberate practice, operationally defined as studying and memorizing words while alone, better predicted performance in the National Spelling Bee than being quizzed by others or reading for pleasure. Rated as the most effortful and least enjoyable type of preparation activity, deliberate practice was increasingly favored over being quizzed as spellers accumulated competition experience.

This grit comes from your heart your commitment to pushing the rock up the hill and understanding the purpose. It is the alignment of your heart and your work. You know when you are out of alignment. You know when you start packing your bag at 4:50pm everyday. You also know when you are energized and exhausted at the same time. This grit can not be purchased. It is acquired and reinforced through your wholehearted engagement. This grit emerges from the work to extract the beauty and meaning from your efforts.

Does not necessarily or exclusively come from your day job. But you have to exercise and grow your grit muscles. You can get your grit on in your volunteer life, at your church, at your kid's school. Where is your grit and how can you make a bigger part of your life?

One of the most influential ways to re-activate your grit is to dive into the need. When you see how your product and service is used. When you talk to the people who need your solution. When you feel the emotional connection people make to your work, it reconnects you with purpose. "Ahhh, that's why I do this."

Make time to visit your "customers", hear their stories, see their faces, and re-immerse yourself in mission.

This is grit that wakes you up from the monotony of your routine and your habits. This is the grit with friction that afflicts the comfortable.

It is a virtuous cycle of grit begets grit. To get grit you give grit.

Whether you are staring at a painting, watching a modern dance, glancing at graffitti, listening to an opera, or sharing a Youtube video---you appreciate what is creative, artistic, and therefore relevant. But do you understand it? Behind all of the art is an artist. Knowing more about the person who made the art can make all the difference in the world in how you perceive, understand, and ultimately enjoy that art.

I got the chance to learn from and about Jake Shimabukuro, the "Elvis Presley of the Ukelele", in a live interview I attended a few days ago. Like all great interviews you gain insight into the person and what makes them tick. His life is a great profile in passion, persistence, and the assistance of others. I gained some extraordinary life lessons from him that I'd like to share with you. 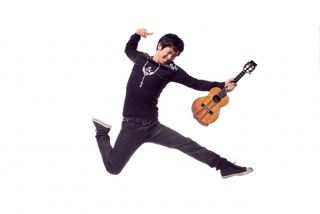 Here's a guy who loves the ukelele (oooh-k00-lay-lay). Born and raised in Hawaii where the uke is a respected instrument and cultural icon. Not something shared by us mainlanders. We think of it as a toy or perhaps a tropical party prop. The ukelele is taught in Hawaiian schools, much like the recorder is in the lower 48. So he learned the ukelele as a young kid and fell in love with it. He literally could not put it down when he was young. He said, "My parents had to pry the ukelele out of my hands, so  I could do other things, like eat." The ukelele has only four strings and so its range is more limited than a guitar, but Jake never thought way. "Once I learned 4 chords I could play 3000 Hawaiian songs." Maybe he exaggerated, but most ukelele players accepted these limits. Not Jake. He experimented, he mastered, he re-invented this tiny instrument over many years. All the while he tried to make a living playing in bands playing covers. After many years, his music won awards in Hawaii. And after a decade or so he recorded a few songs that included George Harrison's "While My Guitar Gently Weeps". He played this song in 2004 on a local Hawaiian tv show. A couple years later, one of the first videos uploaded onto Youtube in 2006 was this tv show starring Jake. Jake still does not know who uploaded it or how they got the video.  People were astounded by what he could do with a ukelele. Long story short it went viral, perhaps one of the first multi-million view Youtubes! It" launched" his career at the age of 29.

I first heard about Jake from the 2010 Ted conference. Watch!

Despite his growing fame and success he is a humble guy who knows his roots. He still loves the ukelele and he has become its greatest evangelist and ambassador. In fact, there is evidence that more people are selling, buying and playing the ukelele because of him! He continues to learn about how he can express himself through it. It is clear he is still an artist driven by his art. Refreshing to see and hear this.

Since he writes all of his own music, he uses a process to get into the emotion and state of mind of the inspiration of the music--like method acting he assumes the role before he plays for each song.

And for all these reasons I appreciate his art, his expressions--his music even more.

Here are the life lessons I got from his interview:

One of his new songs is More Ukelele. Jake wants the world to know and love the ukelele. He said this song was inspired by the following SNL skit More Cowbell!

Never will listen to Jake's music the same way. The same goes for you, the artist in you. When people understand who you are, why you do what you do---they see you, understand you and your causes more clearly. They appreciate you.